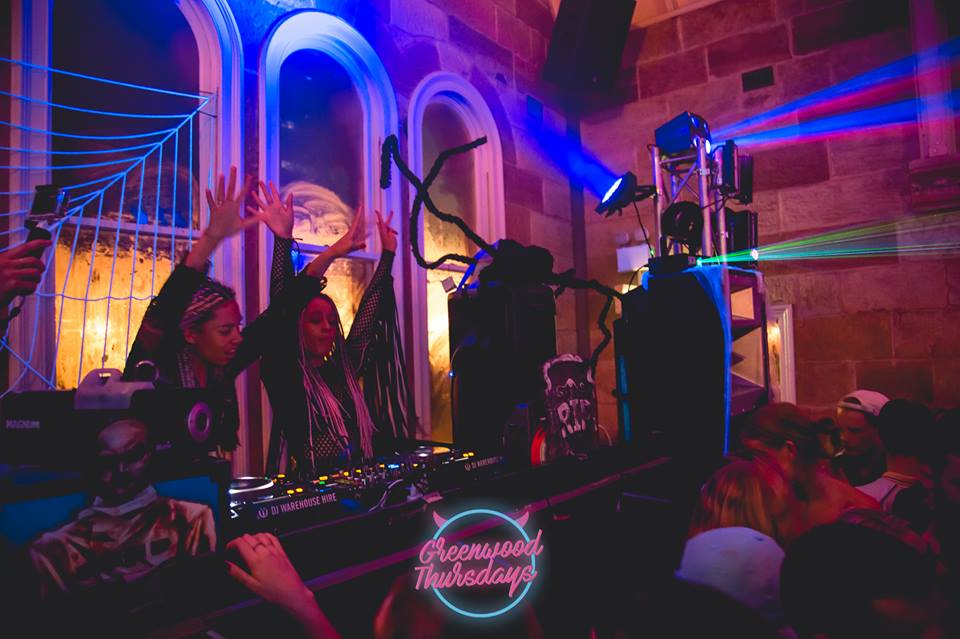 Kinder DJ Set at Greenwood Thursdays in North Sydney at the Greenwood Hotel.

Kinder are a DJ & Vocalist duo consisting of sisters Briony and Savannah from Sydney.

Growing up in the regional Australian town of Maitland, in a musical family on an aural diet of dusty vinyl classics, it was a natural progression for the duo to make the jump from spinning records at home and into clubs. They started making the trip to Sydney to DJ regularly in their teens and the pair learned the ropes playing legendary underground clubs like Chinese Laundry and World Bar before graduating to their own main stage headline slots.

In a short while Kinder have come a long way opening for acts like Marshmello, NGHTMRE and RL Grime, playing a string of Aussie festival dates including Falls Festival, Splendour In The Grass, Mountain Sounds, touring as part of Groovin’ The Moo and Alison Wonderland’s Scarehouse Project.

The sisters are huge fans of Latin dance music leading them to meet and team up with Brazilian producer Bhaskar for their first vocal feature, writing and performing on his 2018 single Hold On, showcasing the pair’s unique interweaved dual vocals for the first time. The track reached 4.4 million streams on Spotify and took steady positions on Brazil’s iTunes Electronic Chart.

A few months later they followed up with their own debut single What You’re Like, unveiling the track live at Spilt Milk festival in Canberra and giving us the first peek at the Kinder sound. The single takes references Afrobeat dance jams of their childhood and latin inspired flavours, receiving their first FM airplay on Triple J, FBi94.5, Austereo hit and P3 Radio Sweden. Their second independent single Something More was very much an arrival for the act, featuring more of a melodic drop and dance beat, receiving Spotify’s “New Music Friday” playlisting in 7 territories including USA, Australia & New Zealand, Sweden, Egypt, Gulf, Levant and North Africa.

The new single No Sleep is Kinder’s debut label release, in partnership with the legendary French tastemakers Kitsuné. While being their most danceable jam yet, the track is also a love letter to their hometown of Sydney. Behind the infectious beat and bass line Savannah’s vocal tells the story of the city that once thrived with venues and nightlife, a scene that due to various political and social circumstances is now all but closed down - but that even if it might be quiet on the streets the magic and emotion that still remains as powerful as ever when you step into the surviving clubs. “That have now more than ever the clubs of Sydney have become more of a church of dance music.” says Briony, “and this is our little tribute to a music scene that we grew up in.”

No Sleep is out now through Kitsuné on Spotify, Apple Music and all good streaming services.

“Oozing style. Pop the bass up and let it rattle you.” - Declan Byrne, Triple J
“Just what we needed heading into the warmer months! BANGA. Ya'll are fun.” Bridget Hustwaite, Triple J
“An absolutely massive debut! Can it please be summer festival season already?! Cannot wait to hear you drop this
one to a coupla massive crowds.” - Andy Garvey, Triple J
"Performing their electrifying, booming DJ sets at every festival under the sun, now they’re making their shiny
debut release – and we’re very much on board." - Purple Sneakers
"Debut single with great results, uniting and captivating." - Pilerats
“Finally a debut single, and boy it’s a doozie.” - Stoney Roads
“Kinder have quickly become an unmissable moment at festivals.” - Project U
"A world of slick afrobeat dance and thumping bass that will definitely shake venue walls." - Pedestrian TV
“Meticulous melodies, which is embodied in their glistening syrupy sound, sweeter than strawberry sorbet.” - Line Of Best Fit

Momentum is building as we hit spring and roll towards summer!
Expect all things spooky, crazy and scary on October 26!
Random Door Prizes will be given to those who get around the theme… No you dont have to dress up but its Halloween so you are crazy if you dont!
This will hit capacity!!!

FREE ENTRY, ALL NIGHT
$5 house spirits + beer from 8-10pm,
Greenwood Thursdays Membership gets you express entry with 4 mates, $6 drinks all night, 2 for 1 Pizzas and other perks!!
Inbox us for details if dont already have that magical pink card!

Once again there will be over the top theming and some really cool halloween style production !!
Plenty of Giveaways on the Way For This Party as well as Your Favourite Local Greenwood DJS!

The Names Kinder and Tom Budin hardly need explaining…Kinder are fresh off their festival runs playing at Groovin the Moo, This That, Mountain Sounds etc…. And Tom Budin
At the ripe old age of 21, Tom has huge global following, zillions of plays & downloads, signed records to SONY USA, Spinnin Records, Heldeep Records, One Love, Ministry of Sound, Universal Music USA, Perfecto and officially remixed number 1 singles such as Zedd – Clarity & Lost Frequencies – Are you with me.