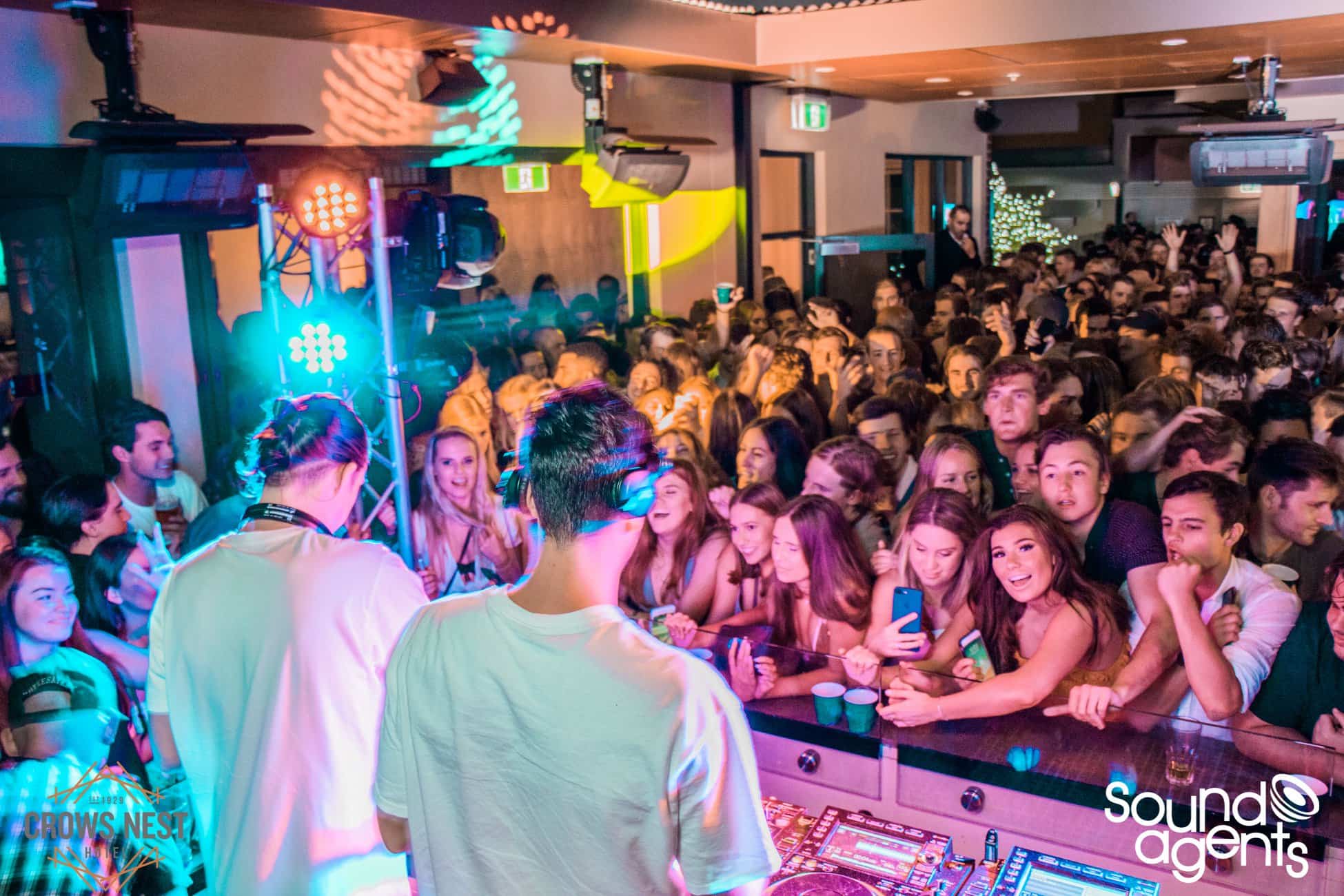 Well groomed, well mannered, well spoken, well dressed, well liked: Set Mo are the DJ / producer duo your mother didn’t warn you about, and in fact, would be glad for you to invite home for dinner — before happily sending you out for an evening of 21st-century-sophisto-disco debauchery with the boys. They seem so nice and trustworthy. (Well, until you’ve witnessed the sweaty, multisensory, marathon-set mayhem of their already kinda legendary Stamina Session club nights, that is.)

Comprising Sydneysiders Nick Drabble (short back’n’sides) and Stu Turner (goatee and ponytail), Set Mo came together in 2012 when the two DJs, who’d often found themselves on the same bill, decided their sounds were so complementary that perhaps they should test how tag-teaming tracks back to back would sound. Pretty good, as it turned out. Studio forays soon followed, resulting in tasty classic house-tinged, guest vocal-driven cuts including Comfort You (feat. Fractures), Chasing Forever (feat. Alphamama), Keep On (feat. Erin Marshall) and the breakout White Dress (feat. Deutsch Duke). Yeah, you heard that one, right?

The distilled sound of a blissed-out Australian summer — albeit, written in London after an eight-day bender in Ibiza — White Dress was the 11th most-played track on Triple J in 2014, and has clocked up more than 20 million streams on Spotify since its launch. Licensed for full release in 11 countries outside Australia (where it was on etcetc), via heavy-hitting majors Universal (Sweden, Norway, Finland, Denmark, Iceland, Baltic States) and Warner (GSA & Russia), in addition to proving popular Stateside, it was a particularly big winner in Germany. “We’re really into artists like Booka Shade from Germany that maybe play a bit deeper than us,” Nick opines, “and I think that influence came through and struck a chord, resonated with people over there.”

Since White Dress broke, Set Mo certainly haven’t been resting on their laurels. Mid-2017 saw the release of vocal house beauty, I Belong Here (featuring lilting Townsville-bred singer/songwriter Woodes on the mic), which received high-rotation support from Triple J, props from UK Radio 1 tastemaker, Pete Tong and Spotify nods of approval via New Music Friday in Australia, Germany, France, Sweden, Norway and Iceland. The past 12 months have also seen a relentless series of sold-out shows and high-profile festival sets, including closing the main stage at Beyond The Valley 2017, opening the new year playing to a capacity crowd at Field Day 2018 and smashing dance floors at a string of sold out show on their 24 da. Vitally though, the guys managed to find plenty of time to record new music — stuff that just might surprise you.

Nick and Stu are huge Groove Armada fans (“I can remember exactly where I was, as a kid, the first time I heard Superstylin’,” Nick enthuses — “it changed my life”). In a way, the new material’s approach and production process echo that of GA’s wildly diverse 2001 album Goodbye Country (Hello Nightclub), which was recorded during nine hermetic months at a studio in a barn in the Cotswolds boondocks. Set Mo didn’t ‘go bush’ quite that long, but last year, they did get away from it all — in the process, getting away from what’s come to be thought of as their signature sound.

At one point, Stu explains, “We spent 10 days in the country on a writing trip, rented this house, set the studio up and were just writing day and night, punching out as many tunes as we could.” Going totally off-grid “was amazing, there was no internet, no mobile network, just this shoddy landline,” says Nick, “and we didn’t give that number to anyone but our girlfriends and our manager.” They also put in time at unfamiliar studios in far-flung places like London, Amsterdam and Berlin. With the change of scenery, lack of distractions and offline peace’n’quiet, says Stu, “we found ourselves writing this stuff that wasn’t a million miles removed from what we’ve done in the past, but it was different — we were experimenting with different tempos, different sounds, and we came up with these songs… There’s a cohesive sonic pallette, but stylistically they could be confusing to people who are purely White Dress fans.”

Hence the decision to (wait for it, this is big) release a new tune each month throughout 2018, which kicked off with February’s drop, Nightmares, a gritty breakbeat number featuring British multi-instrumentalist Scott Quinn on vox. Though their rep thus far has been built on hooky lyrical tracks — and Nightmare’s sure no noodly minimalist instrumental — there’s been more left-of-centre surprises from Set Mo including their moody March drop Unity. “We want people to know we’re not just doing 4/4 beat, vocal stuff,” says Stu. “We love artists like Chemical Brothers and Groove Armada, or Moby and Jamie XX — you listen to their albums, they’ll have big, deep electronic dance tracks, and then delicate, soft, beautiful songs. We don’t want to be pigeonholded as just house DJs. We’re so inspired by different styles of music, and want to express that,” says Nick. Concludes Stu, “No matter what type of music we’re making, when it comes down to it, we’re songwriters, we’re writing songs.”

Best believe, it ain’t all about four-to-the-floor. Set Mo have got much more in store. Each month, a new track, as a matter of fact.

Sydney legends Set Mo are coming to Crows Nest Hotel Terrace on April 28th. With support from Mars Monero, Jordz, Kenoath and Rory Vevers. To make this even sweeter, we have FREE ENTRY all night!

Described by i-D magazine as “Australia’s most optimistic band… they love what they do and it shows,” Set Mo is an electronic music duo from Sydney. Bonding over a fondness for burgers, pho, sneakers and beer (not necessarily consumed simultaneously — and in the case of the kicks, certainly not taken orally), Nick Drabble and Stu Turner first came together as a DJ combo in 2012 and soon progressed into producing tunes. The guys share a love of Basement Jaxx, Booka Shade, Brian Eno, the Chemical Brothers, classic late-1980s house, old-school disco, Groove Armada, Jamie XX and Moby— influences that are as apparent in their music as hints of pepper, plum and blackcurrant are on the nose of a good pinot. Their best-known release to date is the blissed out, sunset-on-the-beach house beauty “White Dress” (featuring Deutsch Duke), which was big all over when it broke in 2014 and has been played a good 18 million times on Spotify since. But they’ve made numerous equally lovely tunes you’d be well advised to give an exploratory spin. Try “I Belong Here” or “Nightmares” for a start. Goes great with a burger and a frosty beverage. (Side serve of Adidas is optional.)